Whenever I am conducting a workshop on coaching and mentoring skills for leaders within organisations, I am almost always asked this difficult question. It is almost like an objection that is posed to a salesman making a sales call:

“All that you are saying is fine, but then, my boss is not at all coaching oriented or people oriented. In fact, he is the very opposite. He does not stand for any of the values that you are talking about? Are you going to be training him? How do I get myself to practice all this when my everyday experience is to the contrary?”

Like a salesman who learns to handle sales objections, I have over the years learnt to answer this question with candour and conviction. However, I am always left with this honest confession in my heart: It must be very hard for someone to demonstrate empathy, interest in others, show concern for their well being and foster their development when one receives the exact opposite from people they look up to.

What indeed is the truth about bad people at the top? And how can a leader or manager embrace and demonstrate a positive style despite not being a recipient of the same?

I would like to draw a distinction between difficult people and bad people at the top.

Difficult people in my view are people for whom all or some dimensions of their emotional intelligence may not be well developed. In a large number of cases, poor emotional regulation is what causes most distress to the people that work for them. They tend to lose their temper and say things that might hurt others. Some might fail to empathise, might have difficulty in building and maintaining relationships or might be unappreciative.

However, at their core, they have good intentions, want to be good spouses, a good parent, a good boss and so on. After every episode of dysfunctional behaviour they might show remorse. They are also open to feedback and receiving help.

Michael Maccoby who was trained by Eric Fromm and recognised globally for his expertise on leadership has dealt with some of these very same dysfunctionalities in his book The Productive Narcissist: The Promise and Peril of Visionary Leadership.

These personality traits and descriptions collectively represent a comprehensive universe of what I call Bad.

In my view and experience, Bad people have little or no regard for other’s feelings or thoughts.

They also display a very high level of selfishness and focus on themselves.

Their desire to win is so high that they want to win even when it does not matter. Given this desire to win, they exploit other people and win at others’ expense. They see others in strictly utilitarian terms, somebody to manipulate for their own ends. They may also play with others’ emotions when they need something done by them.

This means they may not have an interest in others and their development or well-being.

They may come across as extremely competitive and unable to tolerate dissent. They also create an air of fear using the consequences of punishment within the team. This makes it hard for them to collaborate with the ones who need their help in an empowering way.

They may also overstate their accomplishments and may convert every platform as a platform for looking good, and being under the spotlight including their interactions with someone who needs help.

They may also have an excessive concern with orderliness, perfectionism and a high need for control over everything including others, time and the environment. To this end they may be seen as dominant in all social and work interactions.

Sadly, these traits are not present in isolation but appear in combination with other highly functional personality elements. They are gifted with a sharp intellect, great communication skills, limitless charm, courage, energy and the drive to achieve great results and take the organisation to great heights. They are therefore often extremely successful and effective in what they do and that often gets them to the very top.

However, some of their weaknesses and faults can have hugely undesirable consequences for the people they lead and engage with. 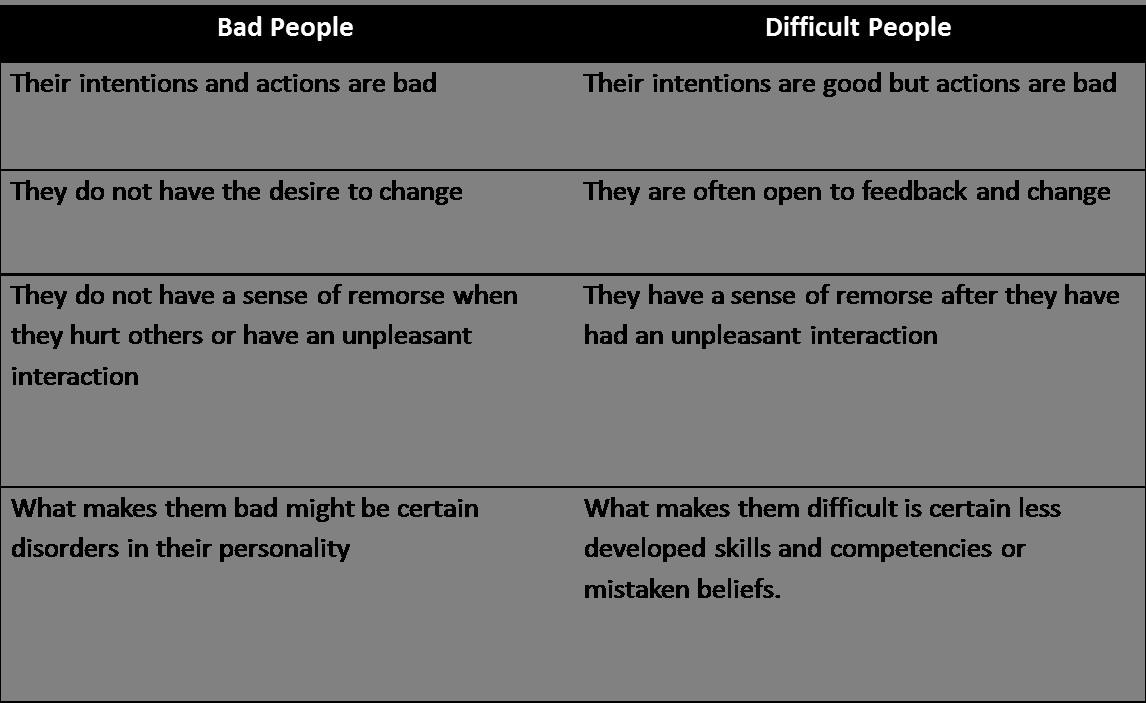 So, if you have trouble with your boss, ask yourself if he or she is Difficult or bad. I am guessing (and hoping) that for most of you the answer would be Difficult.

If he or she is merely difficult, that is great news.

All the modern tools of development hold great promise in helping Difficult people get better. Any empathy, support and encouragement demonstrated by you can only create a conducive environment for change.

As for Bad people, I can only tell you what I did – I quit!

(the image is that of Niccolò Machiavelli. The term Machiavellian originated from his ideas expressed in his work, The Prince. His most famous quote is it is better to be feared than loved, if you cannot be both.)