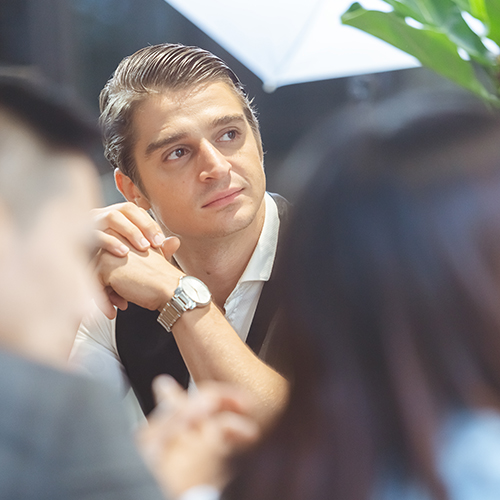 “Mergers & Acquisitions are a business reality among mid-size corporations.  In such contexts, entrepreneurs constantly seek coaches to resolve some of the professional dilemmas arising out of these crucial decisions.

In the case I am about to narrate, the entrepreneur was confronted with an acquisition question – “to sell or not to sell”  a company that he assiduously built.  As a coach who worked with the entrepreneur I present the case in the form of a fable to illustrate how a “well structured non prescriptive coaching process” help the coachee come out with a framework that he used as a permanent acid test to resolve this acquisition issue.   The framework evolution happens through a 3 stage process with ample emphasis given to the emotional aspects: 1  Data collection and analysis 2. Reconciling the data, and the Business Context through unveiling the real story. 3. Moving the Coachee from Reconciliation to Action.The Coach also used certain alternate interventions in line with the subject matter expertise that was required to ensure that the coachee was able to reconcile his personal aspirations and had realistic expectations from the market place.”

I was immersed in a breath taking view of the vast Bay of Bengal from the top floor of my Coachee’s office, when my coachee began talking about a business dilemma he had to overcome. To sell his company or not to sell his Company – that was his question.   He was telling me that a large multinational had offered him 6 million USD and this would mean enough money for him to retire in peace.  Knowing that he owned a large majority of the company, his friends at the Club kept pushing him with some “good” advice like, “What are you waiting for man – Collect the cash and go to the Caribbean”. It was then that the Coach in me awoke to the scene and I decided not to give him free advice like his friends but to skilfully unveil the story behind the question.  If deciding to cash out was so simple for him, I realized I would not be sitting in front of him.

It was my job as a Coach, trained in Skilled Helping to adhere to the strict belief that the answers to the Coachee’s questions lay deep inside his intellect and that it was my duty to shine the torch and get him to own the question and the answer.  Now came the challenge of adapting a structured Coaching model to this M&A situation. I proceeded to acquire as much relevant data as possible through dialogue and assessment tools.

Stage 1 :  The data acquisition and analysis stage.  My first attempt was to understand my coachee’s personality type and to establish the relevance of this acquisition dilemma to his current business context.  I also embarked on series of empathic dialogues, that included the history of his business, his own personal aspirations and his professional outlook for the future.   It was necessary to unveil his current state of mind in the context of the M&A.  This, I surmised could also be a clear pointer as to why he was finding it tough to take a call and why he needed my “Skilled Help.”

The data that was available at the end of this stage was the following :

Personality Type :  My coachee turned out to be a Highly expressed extraverted personality with a large leaning to be a paternalistically driven and gut feel (intuition) based self made individual.  MBTI – type ENFJ.

He came from a lower middle class family with no other earning member. Against all odds he started the Company during the early 1990s.

Grew from a small 12 man team doing mass mailing for a leading bank.

Ø  Slowly diversified into becoming their customer service department for letters.

Ø  By 2003, more units of various multinational banks became his clients.

Ø  With a team strength around 1250 they are a reputed provider of backend services to large banks and are housed in a large 50000 sq feet space which they own.

Ø  To create enough wealth in the next 6 to 7 years, in order to be able to satisfy and fulfil the professional and financial aspirations of his loyal core team members, who have been instrumental in his success and growth.

Ø  To leave behind  a good professionally managed and financially successful conglomerate of companies, for his sons to take over and run independently from the year 2016 onwards (he planned to retire from a full time CEO position)

Ø  To go more “Rural” and attempt to do more and more services with the help of rural youth, thereby achieving “Cost Effectiveness” on one hand and “Satisfaction of contributing towards Society” on the other.  He already was employing 100 people in a rural setting and was proud about how he felt life in the villages around his rural venture had changed for the better.

Armed with this data, it seemed quite infeasible that he would ever sell his company and retire. But obviously he was seeing some merits in a financial exit. May be this was what needed to be probed in the next few coaching sessions.

Stage 2 :  Reconciling the data, the Business Context and the acquisition question through unveiling the real story.

During the coaching sessions, I needed to establish the real issue that was keeping him from selling the Company and then help him evolve a way forward to resolving the same. Some key probes had to be administered and these had to connect the current acquisition question to his context and his aspirations.  It needed two coaching sessions to establish a large enough empathy and to challenge the coachee into getting him to opine on the issues presented below.  The probes were however framed differently and were based on conflicts/feelings that he had raised all through this stage.  The Key Dilemma was then narrowed down to :

Stage 3 : Moving from Reconciliation to Action

Point e above was the final trigger that moved the Coachee into action. He started thinking aloud that unless he came out with a clear set of parameters on “why and when” he would say Yes to acquisition, he would continue on an endless mental debate and feel very stressful.

What ensued from these was an unfolding of a wonderful 4 point framework that the coachee articulated. The highlights are as follows :

The acquirer had to be a large multinational with an ability to offer substantial growth to the current senior and middle management team. The Company would not be sold to another family business or an unknown brand just because the acquisition price was good.

b.      The acquirer had to be culturally conscious of the loyalty and hard work that the team had put in and should not plan to indiscriminately cut costs and bring down headcount for at least 3 years.

d.      The acquisition should not prevent the Owner (Coachee) from pursuing business outside of the current customers and should in no way be a bottleneck to the globalization and rural service aspirations.

The coachee re-iterated firmly that this 4 point framework would be his acid test framework for any potential acquisition in the future.

For the coachee to arrive at this framework, the following alternate interventions were deployed through 3 sessions of Stage 3:

It was more than 5 months, when the coachee suddenly called me. He told me “Hey Coach ! I rejected 2 acquisition proposals based on the 4 point framework, but here I have one that fulfils the top 3 criteria well. However, they are willing to pay me more money if I compromise on the 4th criterion for the next 3 years. I have decided to go with the deal “.  I asked him if he was happy, satisfied and had no conflicts. He said “Yes” and I replied “Congratulations!!”.   Silently, I thanked my Coaching guide for constantly re-affirming to me that what really works is a structured non-prescriptive coaching process.