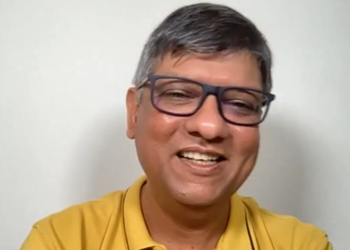 As coaches we are trained to help others identify their strengths and leverage them to lead happy and fulfilling lives, both professionally and personally. However, being a coach also involves constantly challenging and enriching our own lives to help us effectively partner with others. One such opportunity to introspect and be inspired was made possible by the Western Chapter of the CFI Community, with a virtual talk titled ‘Leading through Adversity, a conversation with RamG’. The event had CFI Coaches Raj Swaminathan and Ravi Pisharody facilitating the session.

With a title like that one understands that the speaker has had to face a lot in life. However, nothing prepared us for either the depth or the frequency of adversities and the victories over them that RamG shared with us in his casual, smiling, no-fuss demeanour.

His journey from studying in a regional language, not knowing a word of English to becoming alumnus of IIT Madras and XLRI and getting plum placement offers was itself a story of true resilience. Little did we know this was not even half the story!

A curveball in the form of a rare autoimmune disorder together with losing a job; being brave enough to stay positive, get another job and sign up for a clinical trial –  the stories that RamG shared, were most unpredictable. From being the COO of a multinational to becoming someone who found buttoning his shirt excruciating, the highs and lows of RamG’s life brought to mind the fragility of all that we take for granted.

When asked how he was able to sail through all this without losing hope, he answered: “A combination of nature and nurture.”  RamG credits his parents with role modelling resilience and positivity. His attempts at fighting back included setting audacious goals for himself. He believes that “When the going gets tough, the tough get humorous!” Imagine finding it in himself to write a bestselling science fiction book for children, using a voice-to-text software because his fingers did not have the strength to type…and then some more books that were best sellers…!

He believes ,“Life is a long innings; you don’t have to give up hope every time things go downwards”. Trying to capture his journey in writing does not do justice, so do click on the link below and listen to RamG’s story …. we hope you come away as inspired as we were!