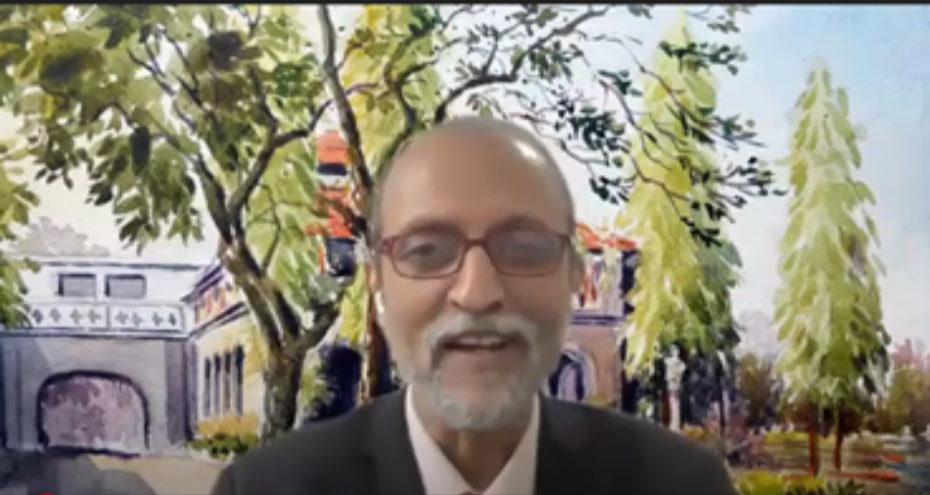 The CFI Coaching Festival 2022 has been a continuous celebration of the various dimensions of executive and leadership coaching. The latest event in the festival was held on the 15th of November – A webinar on ‘Macro-Economic Trends and Socio-Political Headwinds’ by Dr Ajit Ranade, Vice Chancellor of Gokhale Institute of Politics and Economics in Pune. Dr Ranade was earlier Group Executive President and Chief Economist with the Aditya Birla Group, the Indian Multinational 60-billion-dollar conglomerate. Apart from being an executive member of many industry chambers, Dr Ranade is also co-author of an award-winning book, ‘Rising to the China Challenge’ (2021). He is an IIT Bombay-IIM Ahmedabad Alumnus and received his PhD from Brown University.

Expectations were high and the audience hoped to go away with deeper insights into what is happening in the world around us. Not only did we get deeper insights, we also listened to new perspectives that ignited new conversations, introspection and research!

The session started off with Sachin Paranjpe inviting Dr Ranade to share his perspectives on 5 factors that Dr Ranade had spoken about towards the end of 2021 – Growth, Inflation, Technology, Geo Politics and Azadi Ka Amrit Mahotsav, neatly acronymized by Sachin as GITGA.

Dr Ranade started off his talk with how everyone expects economists to make predictions and shared an interesting anecdote of the Queen asking a galaxy of economists who had congregated in the London School of Economics, why they could not predict the global financial crisis that struck in 2008 starting off with the fall of the Lehman Brothers.

They did not really have an answer except to say it was a collective failure, not only of economists but also rating agencies, regulators, bankers and borrowers! With this story as a disclaimer, Dr Ranade went on to share his perspectives on GITGA. We present below some of his main thoughts.

Growth: He shared that as predicted; we are looking at the calendar year ending at 6-7% growth which is much higher than the rest of the world which is at around 3-4%. He also noted that the last two quarters could possibly see a slowdown.

Dr Ranade spoke of the prominence of the K Shaped Growth phenomenon which essentially means that while there is growth, one section of the economy is gaining disproportionately from it. Inclusive growth is critical but currently there is widening inequality in access to good education, and health. There also exists the digital divide where millions of children had an academic setback for almost two years as there was either no smart phone or connectivity or power.

He stressed that at some point the economic divide could manifest as social instability which would in turn deter investors. He equated inequality to pollution and stated that while it is difficult to have no inequality, we need to arrive at an optimum level!

Inflation: He connected this back to the Queen’s anecdote and shared that the inflation we see today actually has its roots in the financial debacle of 2008 when the world went on a money printing spree (quantitative easing or QE) for almost 10 years after, in efforts to stimulate the economy. While money circulation increased at around 15%, the growth in terms of goods and services was only around 4-5%, creating the classic situation of too much money chasing too few goods. Most of the money landed up in the stock markets and housing markets of the world. Therefore, there was no need to wait for the Ukraine war and supply chain disruptions to predict Inflation! He believes that we will continue to have relatively higher inflation, well into next year

Technology and the Geopolitical situation: Dr Ranade stated that geo politics started playing a bigger role when Mr Trump became president and adopted a confrontationist attitude with China. More than trade, the US seem to be worried that China is getting ahead in AI, 5G, Robotics and even in autonomous car technology! Therefore, it is more a tech cold war and countries would be forced to take sides – The US sphere or the Sino sphere. Geopolitical turmoil according to Dr Ranade is only a proxy for the tech cold war.

Azadi ka Amrit Mahotsav: As India enters its 75th year of independence, Dr Ranade says that this is going to be India’s decade. We have a younger demography that is expanding the workforce at a faster rate than the growth of our population. The other positive factor is that urbanization is only at 30% whereas the world average is 50%. Both these factors will ensure strong growth in the future as well.

India, for the last 75 years has always followed a policy of strategic autonomy and this will benefit us as investors will find India a good alternative, especially to China.  We are also leading in renewable energy and this is also going to be a significant factor in our growth.

Dr Ranade touched on many other interesting aspects ranging from the paradox of having China as our number one trading partner and how we are yet to break into their market, how the Ukraine war was bound to happen, to the possible impact of the Central Bank’s digital currency. He also asked tough questions on what we should see as the problem – the hunger index or the hunger. He advocated more autonomy for local governments and put in perspective the layoffs that are happening today.

He shared with us his personal litmus test for a country to qualify as a developed nation which had a lot of people nodding in agreement:

3.     Is the neighborhood school the preferred choice of parents?

Finally, when asked what he thought the litmus test was for a leader, Dr Ranade informed us that Belgium has been functioning without a leader for the last two years due to a political deadlock. However, their economy is seeing great growth. He therefore believes that pursuing excellence in whatever one is doing is what is most important. One would be a true nationalist and patriot if one settles for nothing less.

As coaches, it is important for us to have open minds and constantly challenge our own perspectives.  We are truly grateful for the talk by Dr Ranade which was full of insights that both surprised and challenged our own perceptions in many ways. We invite you to click on the link below to watch the whole conversation.